This study is based on three major theoretical frameworks. First is the “Complex Contingency Theory” of leadership. Second is the “Evolutionary Model” of cultural anthropology. Third is the “Functionalism Model” of cultural anthropology. It should be understood that a theory as used in this study provided an explanation while a model presented the approach used to advance a theory. Thus, only one main theory was presented but several models were used in this study.

On one hand, “Evolutionary Model” is a theoretical framework used to explain human actions by providing more than just a description of historical development but supplying an explanation of this development in terms of man’s increasing rationality and human progress. Stages of development for particular traits were not determined primarily on the basis of historical evidence, but on the assumption that there was a logical evolution from simple to complex. It provides social scientists a grand scheme, into which they could fit data from all human societies (Hiebert, 1992, 69-70).

“Leadership Selection Process Model” deals with an overview of the life-time process of God’s development of a leader. It refers to anything in the life-history of a person which God uses (1) to indicate leadership potential, (2) to develop (train) that potential, (3) to confirm appointment to a role/responsibility, and (4) to move the leader along to God’s appointed ministry level for the realized potential (Clinton, 1984, 20). The main aim of “Leadership Selection Process” is to record the leadership development phases of a leader through the use of the “time line” in order to determine his appropriate “sphere of influence” where he can be effective.

The “time line” is the linear display along a horizontal axis broken up into developmental phases which includes all pertinent data about a leader displayed in a chart format (Clinton, 1984, 22, 25). The following figure presents an example of a “time line chart.”

Knowing these four major “time line” divisions would be very helpful in understanding the four foundational phases regarding the construction of leadership attitude particularly the readiness of a leader. First, a child’s formative years are the most important for instilling the right attitudes (Maxwell, 1993, pp. 53). In other words, the best time to develop the worldview of a potential leader is from ages 0-7 as presented in the “time line chart.” Second, an attitude’s growth never stops (Maxwell, 1993, pp. 54). Thus, the best way to build right leadership attitude as the leader grows is through formal education. Third, the more our attitude grows on the same foundation, the more solid it becomes (Maxwell, 1993, pp. 55). Thus, the best way to strengthen leadership growth is through migration/dislocation provided that the potential leader should be placed in a leadership development program that has the same foundation as his former leadership training. Fourth, may builders (specialists) help construct our attitude at a certain time and place (Maxwell, 1993, pp. 53-55). In other words, leadership mentors are very essential in leadership development, however, often times experienced leaders are willing to mentor only rising leaders who have commitment.

By breaking the historical background of leadership development among the student officers into “time line charts,” the researcher will be able to assess and determine the readiness of the student leaders so that they can be placed to their proper “sphere of influence” where they can be effective. Thus, the time line chart” in “Leadership Selection Process” will make possible the proper application of “Hershey and Blanchard’s Situational Leadership Model.”

Hersey and Blanchard’s situational leadership model is one of the contingency theories that focused on the integration of the leader’s attitude, his “sphere of influence,” and their situations. Robins (2001) wrote:

This leadership model simply presents the use of both task behavior and relationship behavior to influence followers. Hersey (1984) explains that

The following is the chart display of “Situational Leadership Model:” 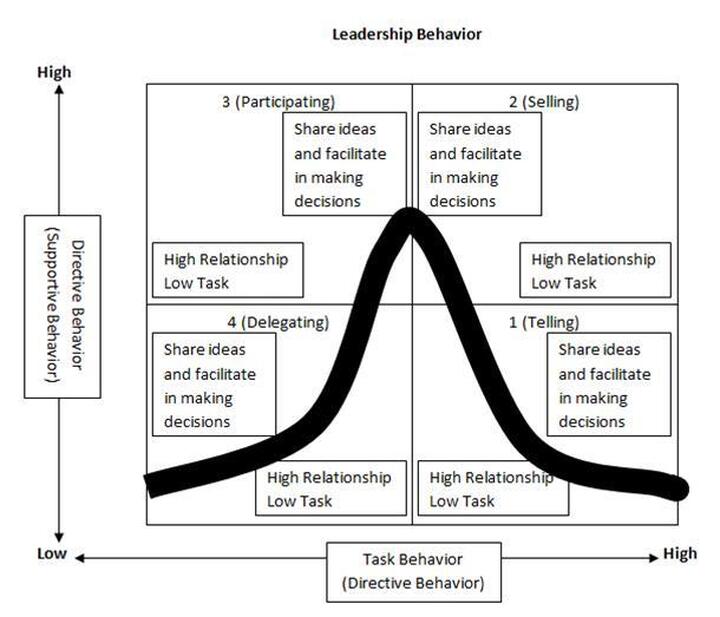 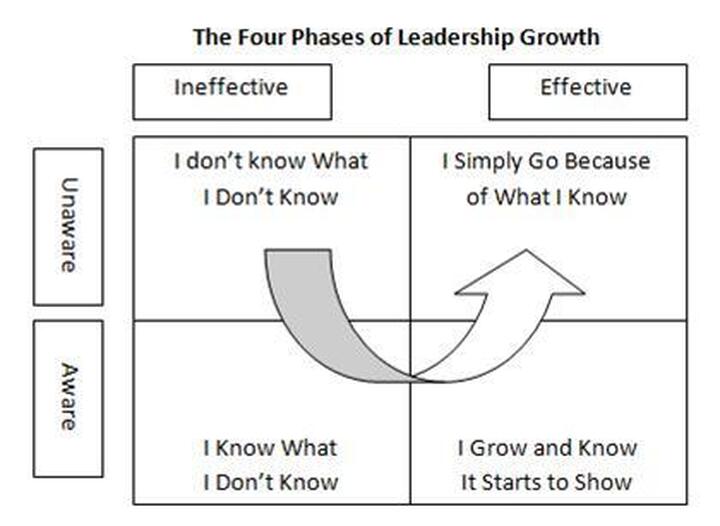 Based on this four phases of leadership development, Maxwell (1995) also presented a simplified format of developing potential leaders:

"Step 1 is “I model” wherein the process begins with my doing the task while the people being trained watch. Step 2 is “I mentor” wherein I continue to perform the task, but this tie the person I’m training comes alongside me and assists in the process. Step 3 is “I monitor” wherein the trainee performs the task and I assist and correct. Step 4 is “I motivate” wherein I take myself out of the task and let the trainee go but I make sure he knows how to do it without help and to keep encouraging him so he will continue to improve. Step 5 is “I multiply” wherein once the new leaders do the job well, it becomes their turn to teach others how to do it" (pp. 99-101).

In summary, “Evolutionary Model” as a theoretical framework, is very helpful in providing the historical development as well as supplying an explanation of this development in order to provide proper strategy to handle this development.

On the other hand, “Functionalism Model” is a theoretical framework used to explain human actions by explaining traits in terms of their social significance or by the functions they served within the society. A general agreement developed that the basic function of all traits was to weld society together into an organic whole and that all cultural practices contributed to the maintenance of a social order (Hiebert, 1992, 69-70).

a term in leadership development theory referring to the totality of people being influenced and for whom a leader will give an account to God. This can be broken down further to personal DIRECT INFLUENCE (face-to-face present ministry), INDIRECT INFLUENCE (not time bound), or ORGANIZATIONAL INFLUENCE (flowing through organizational structures) (Clinton, 2006, 254-255).

There are three major divisions regarding the power bases of leadership. First is the “Natural Power Base” which includes legal, traditional, and charismatic power bases.

“Legal Power Base” is an authority base finding its legitimacy on rational grounds, appealing to laws that have been formed by the group involved. Followers express an impersonal loyalty to the leader’s office rather than to his/her person. The leader’s right to issue commands is based on rational laws rather than having personally earned the right.

“Traditional Power Base” is an authority base finding its legitimacy in the sanctity of traditions that leaders respect and follow meticulously. Loyalty, though given personally, is based on the leader’s respect for tradition.

“Charismatic Power Base” is an authority base which finds its legitimacy in the personal charisma of leaders. Exceptional character qualifies them to lead. Followers are loyal to them personally. Leadership may be irrational. Appeal is made to extra-ordinary gifts rather than to rational laws (Clinton, 1984, 74).

Second is “Indirect Relational Power Base” which includes “advisory,” “associational,” “writing/teaching/radio” and “others.”

Third is the “Spiritual Power Base” which includes “life,” “prayer,” “ministry” and “Word.”

Any increase in the level of “sphere of influence” in any of the variables means a development of leadership ability. The next subscript shall present the five levels of leadership development.

There are five major categories of leadership levels. Level 1 leaders voluntarily serve without pay in a local, limited sphere of influence. They minister directly or face-to-face. They relate to their ministry as non-professionals (Elliston, 1992, 29). Examples are Sunday School workers in local church, home group leaders, and youth workers (Clinton, 1993, 32).

Level 2 leaders voluntarily serve in a local, church-wide sphere of influence. Their ministry is direct or face-to-face. They are typically paraprofessionals, that is, they work alongside professionals with either mature experience or some specialized training (Elliston, 1992, 29). Examples are visitation workers, bi-vocational pastor, part-time evangelist, part-time pastor, pastor shared between two small congregations, evangelist/church planting paid worker (Clinton, 1993, 32).

Level 3 leaders are generally paid… and have a local community sphere of influence. Their primary sphere of influence is direct, but they have some indirect ministry. They would be considered as semiprofessionals and are eligible for ordination (Elliston, 1992, 30). Examples are full-time paid pastor, youth worker, evangelist, other staff workers in a larger local church (Clinton, 1993, 32).

Level 4 leaders are paid professionals having completed their training and demonstrated both their competence and commitment. They generally have regional (or national) sphere of influence which reaches people beyond their direct contact. Their influence is mostly indirect (Elliston, 1992, 31). Examples are heads of small mission organizations, denominational workers, national evangelists, teachers in seminaries or other training institutes training full-time Christian workers, national strategists, authors of training materials and books used nationally across denominations, seminaries and institutes, theologians of national influence (Clinton, 1993, 32).

Level 5 leaders are paid professionals who have their specialty. They influence indirectly across national or international regions through denominational structures, writing, and teaching in theological education. They only know the kinds of people their leadership is intended to influence (Elliston, 1992, 31). Examples are heads of international organizations, Christian statesmen who travel internationally and influence several nations, prominent theologians, trainers of Type 4 leaders (multi-country), prominent authors of Christian materials, charismatic leaders who begin movements and organizations (Clinton, 1993, 32-33).

The following is the chart format of the different types of leaders. 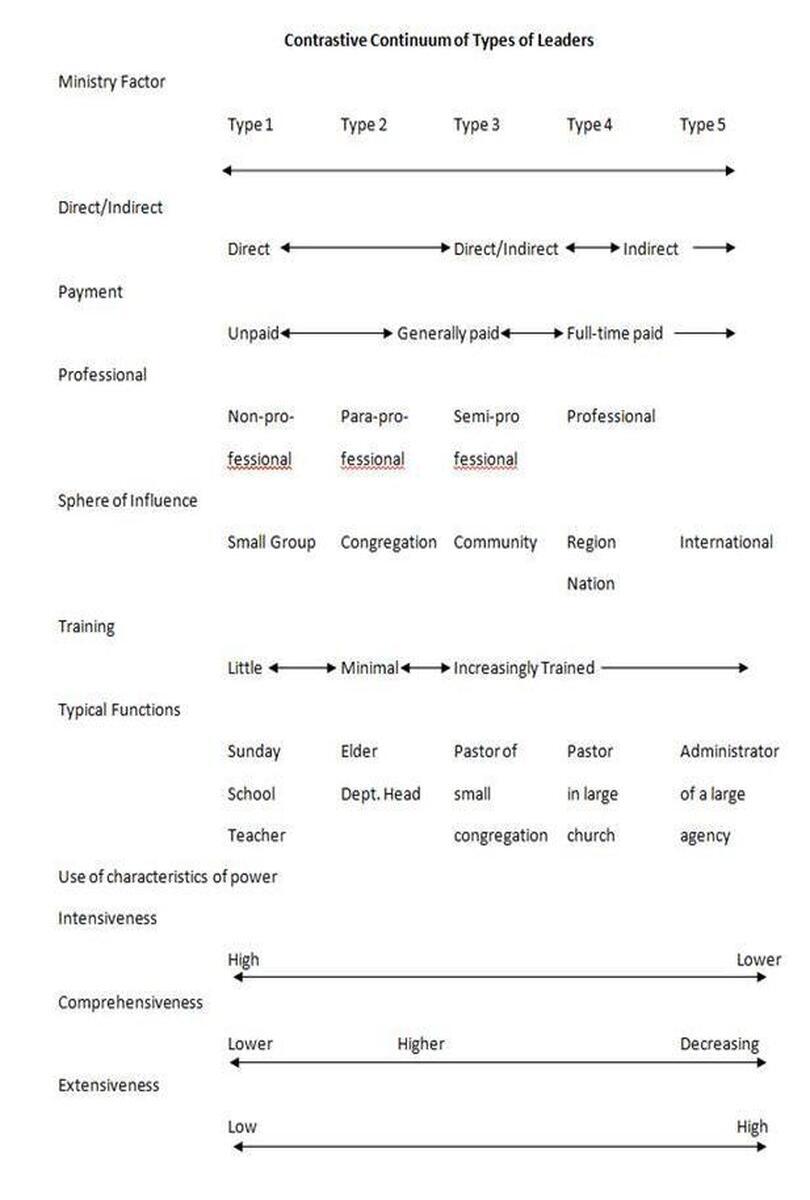 The following is the chart format regarding the “Sphere of Influence Model:” 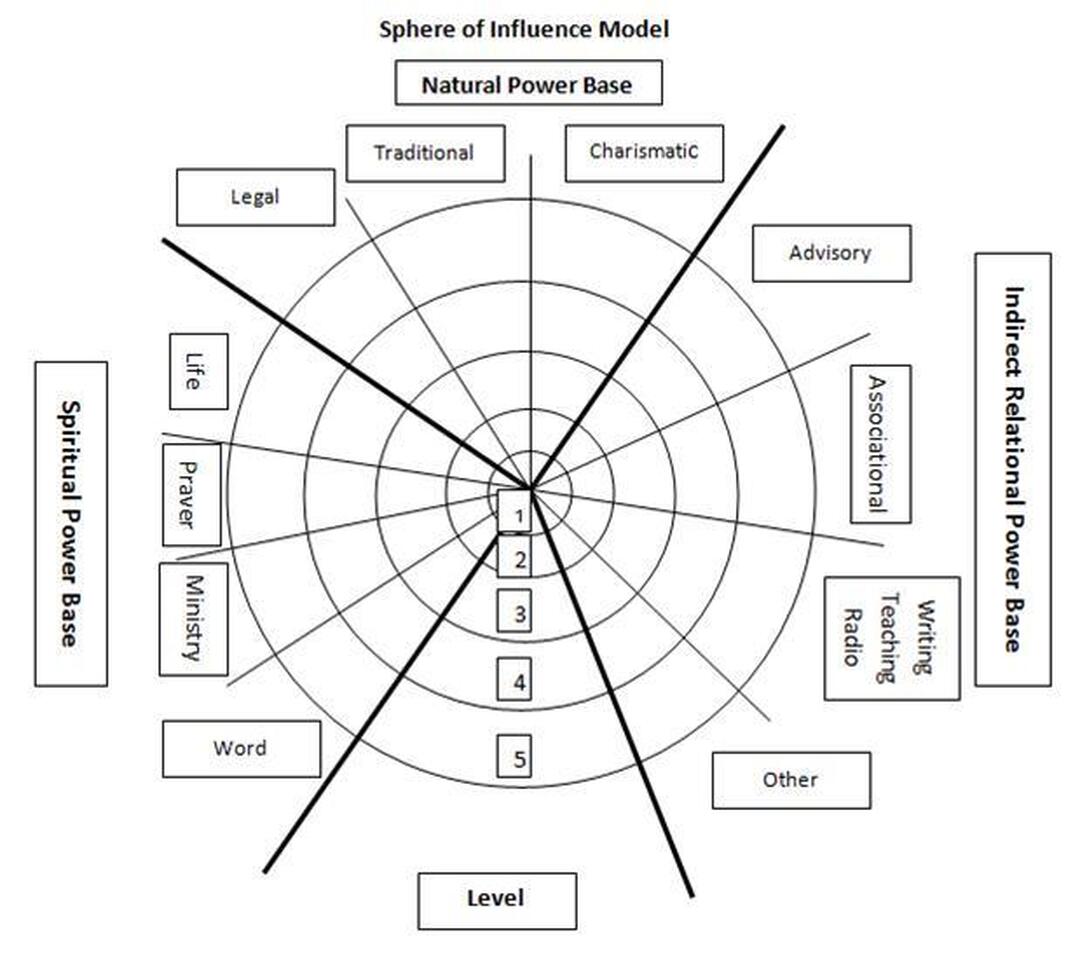 Adopted from Robert Clinton’s Leadership Training Models (1984) 72 with some modifications based on Elliston’s five categories of leadership levels.

Functions of Leaders in Different “Spheres of Influence”

The functions of leaders in the different “spheres of influence” can be understood better as applied to military organizational leadership wherein leadership is not the same thing at all levels and each level have a separate and distinct function. Malone (2003) wrote:

"The Generals (top management) bring together units, fire support, and supplies at the right place and time for battle. The Colonels (middle management) direct and control the larger units in battle. The captains (small unit leaders) lead the small units that fight the battle. Generals have no business hanging out of helicopters trying to fight small-unit actions. By the same token, small-unit leaders are not the experts in concentrating forces and in the big chess games of the battlefield" (pp. 26-27).

Moreover, there should be a differentiation as to the degree of functions in which the different leaders practice both the art of leadership and management.

"In battle, when soldiers die – and in battle, some must – they cannot be managed to their deaths. They must be led there. You manage machines and programs and budgets. You lead men. Managers don’t take those battlefield risks. Leaders do. Managers work with things and numbers. Leaders work with people and feelings.

Command, at any level will always be a mix of leadership and management, but the proportions will vary. At the GENERALS’ level, more management than leadership. At the CAPTAINS’ level, far more leadership than management" (Malone, 2003, p. 30).

Treatment of performance in different “spheres of influence”

"Differentiation is a process that requires managers to assess their employees and separate them into three categories in terms of performance (functions): top 20 percent, middle 70, and bottom 10… The top 20 percent of employees are showered with bonuses, stock options, praise, love, training, and a variety of rewards to their pocketbooks and souls. There can be no mistaking the stars at a company that differentiates. They are the best and are treated that way.

Managing the 70 percent is about training, positive feedback, and thoughtful goal setting. If individuals in this group have particular promise, they should be moved around among business and functions to increase their experience and knowledge and to test their leadership skills.

In summary, contingency theory is used to support the claim that leadership can be developed when there is an interaction among the leader’s behavior, his “sphere of influence” (followers) and their complex situations. “Evolutionary Model,” on one hand, provided the historical development of a person’s leadership growth as well as supplying an explanation of this development in order to match the leader with his appropriate “sphere of influence.” “Functionalism Model,” on the other hand, presented the necessary functions which the leader should address based on the different “spheres of influence” so that he can be rewarded or punished based on his performance. In short, “Evolutionary Model” measures the “inscape” of a leader while “Functionalism Model” measures the “landscape” of a leader. The integration of both the “inscape” and the “landscape” of a leader in different situations will thereby lead to leadership development.